Another small coast castle west of Split is Fort Kaštilac or Kaštel Gomilica. It was built by the Benedictine nuns from the nunnery of St. Rainerio in Split between 1529 and 1537. It has been reported that 17 families of the Kozice village were able to build their houses in the protected area. 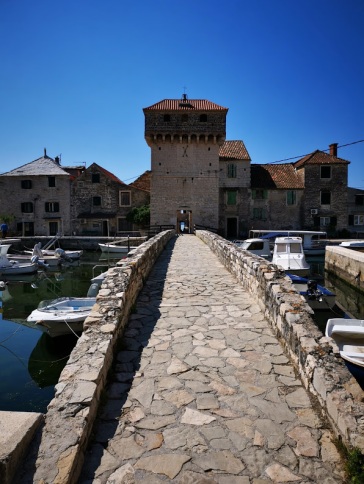 A visit is a must for every Game of Thrones fan, since this is the shooting location for Braavos. 40 meters from the shore, Kaštilac is situated on a rock in the sea, connected to the mainland only by this stone bridge. Back in the days there was also a crenellation and a wooden defensive walkway. In the middle of the Northern wall the defensive tower with a machiolation (a gallery protected by brackets from a vertical surface) is still complete today. There is also a sea gate on the southern side to be seen, where there used to be the nunnery with its press and an olive mill.

The fort is inhabited and beautifully decorated. Its Romanesque architectural style can be identified by the semi-circular arches. You can also stay overnight in one of the different accomodations.

Castle Fact: Out of the seven so-called “castles” in Kaštela, Kaštilac is the only actual castle.